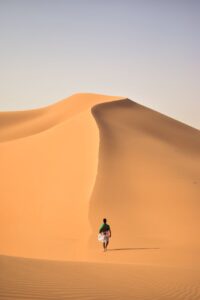 Jesus returned from the Jordan River full of the Holy Spirit, and was led by the Spirit into the wilderness. There he was tempted for forty days by the devil. He ate nothing during those days and afterward Jesus was starving. The devil said to him, “Since you are God’s Son, command this stone to become a loaf of bread.”

Next the devil led him to a high place and showed him in a single instant all the kingdoms of the world. The devil said, “I will give you this whole domain and the glory of all these kingdoms. It’s been entrusted to me and I can give it to anyone I want.  Therefore, if you will worship me, it will all be yours.”

Jesus answered, “It’s written, You will worship the Lord your God and serve only him.”

The devil brought him into Jerusalem and stood him at the highest point of the temple. He said to him, “Since you are God’s Son, throw yourself down from here;  for it’s written: He will command his angels concerning you, to protect you and they will take you up in their hands so that you won’t hit your foot on a stone.”

Jesus answered, “It’s been said, Don’t test the Lord your God.” After finishing every temptation, the devil departed from him until the next opportunity.

Jesus returned in the power of the Spirit to Galilee, and news about him spread throughout the whole countryside. He taught in their synagogues and was praised by everyone.

If you listened to our podcast series on scary things, you’ve heard some of my stories about growing up believing in Satan. I spent so much time being terrified of being led astray. Worried Satan could hear me, that he would steal me away from God.

Because of this passage in Luke, I was taught that Satan knew Scripture and so I needed to know Scripture even better.

But really all of these stories were about how I couldn’t trust myself. I couldn’t listen to my intuition. I couldn’t even really believe that I was hearing from God because even Satan knew the Bible.

It made an already anxious kid even more anxious. Worried, always, that I was doing the wrong things. I often felt fragile and frail. With weak faith.

It wasn’t until I graduated from college that I was able to step out of the faith of my childhood, and start to really wrestle with what I believed and why. That period of wrestling, of discerning, of grappling, taught me a lot about temptation and wilderness. But not in the ways you might expect.

When you hear “wilderness” what do you think of? When you think about what it means to be temped, what comes up for you?

I grew up thinking about the wilderness as a period of desolation and isolation. The Israelites wandering for 40 years. Jesus being tempted for 40 days with nothing to eat. So when I started my own wilderness journey, I was thinking of it in the same negative aspects. I was wandering (probably away from God). I was alone. I was going to be tempted.

And the temptations I would face were all about doing the “wrong” things. Saying bad words. Being queer. Thinking dirty thoughts. It was all about me and my relationship with God.

It wasn’t until years later that I actually read and understood this passage the way it was meant to be understood.

Because something happens when you strip away what you THINK you know and actually read the text.

Then we’re told that Jesus is tempted for 40 days by the devil. But the text doesn’t actually tell us anything about those 40 days. It’s not until after the 40 days, when Jesus hasn’t eaten and is weak, that the writer tells us the tempter speaks.

I often wonder what happened in the silence. What were the thoughts that went through Jesus’s mind? What were his private temptations? Did he despair? Begin to doubt his belovedness? Did he wonder why the high of his baptism went away so quickly? Did he struggle to get it back?

This word that’s used in the text: the devil, it doesn’t mean the personified Satan with horns and a tail that we see in bad Christian art, this word isn’t a person or a being, it’s a word meaning “to bring charges”. It’s the action of being slandered. There’s a way of reading this passage where Jesus spends 40 days with his own mind bringing charges against him.

This is also the time when Jesus has been inaugurated into his new ministry but hasn’t started it yet. So there are all of these questions about HOW he’s doing to do what he came to do.

And these temptations he faces are about those questions. Will he look out for himself and eat even if people around him go hungry? Will he seek political power and try to make change happen that way? Will he only face the cross if he knows he won’t really be hurt in the end?

We can understand the wilderness as a generative time. A time to get focused and go deep. A time to really hear where the Spirit is leading us. A time when we come to understand how we can best be of service in the world.

The wilderness doesn’t have to be scary or depressing or dire. Instead it’s a time to remain rooted. To strip away the superfluous and remember both our belovedness and our calling.

May we all remember how loved and connected to the Divine we are, even when we face doubts and temptations. And then may we walk out of the wilderness and get to work.