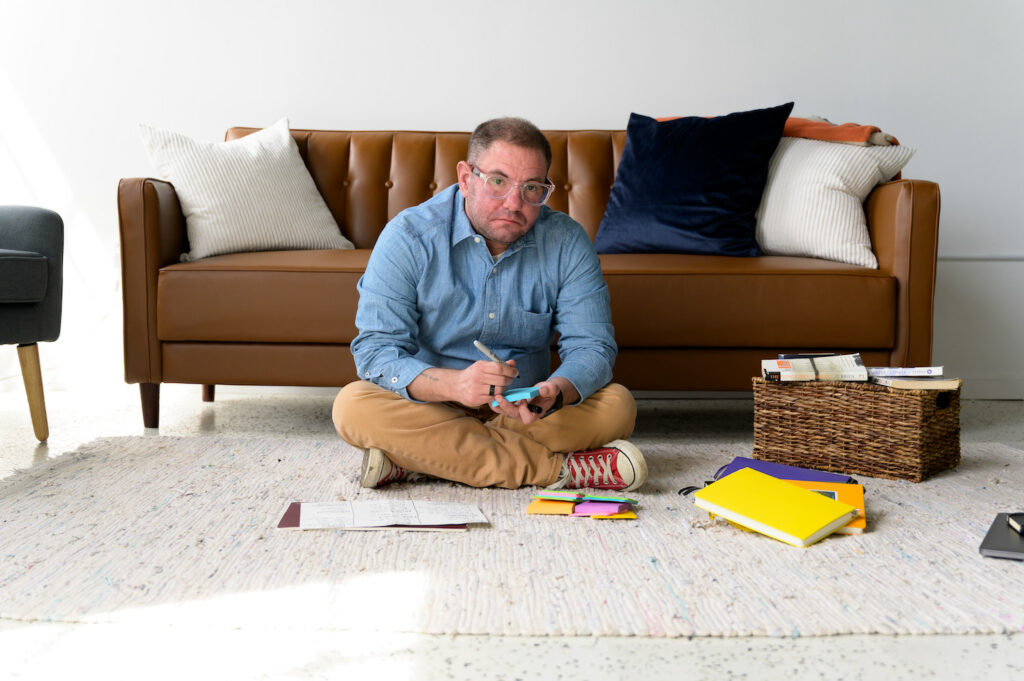 I grew up in a fundamentalist Christian church in rural Pennsylvania and knew I was different from the time I was very young but I had no language for my difference. My life, in many ways, has been a search for that language. I looked to stories as my first reflector of self: books, plays, television, and film became my window into the outside world. No matter how hard I looked, though, I only caught glimpses, fragments; I never saw myself fully reflected. So I started writing to ask the questions I didn’t see anyone else asking. I wrote to try to find a place for myself in the world of stories. I wrote to try to define and name myself.

I stayed in the church and in the theatre and never felt fully at home in either. Where was the space for a visibly queer kid? Where were the roles for someone who didn’t fit into traditional notions of gender? Where could I be at home? Be myself? Yet, even as I grappled I couldn’t let go of either Christianity or the theatre. There was something in the Jesus story that wouldn’t let me go: a story of a man who made a space for the most marginalized. A man who was an outsider. A man who traveled around and told stories so that others on the outside could feel their worth. In theatre I found a community who let me be weird and quirky. I felt something holy happening when we sat in rooms together and asked hard questions. I couldn’t give up either of these sanctuaries even as I wasn’t sure how to find a place in them.

It was in reading other people’s stories that I was able to name myself: first as gay then as transgender. I became the first openly transgender man ordained to the Old Catholic priesthood. I continued to tell stories. I continued to enact rituals on church altars and on theatre stages. For a while I tried to keep these pieces of my life separate, but they continued to bleed into one another and so I am now embarking on the great work of integration.

See, I exist with all of these strange worlds inside of me. I will always be the kid from rural Pennsylvania. I will always feel the angst of spending so many years of my life not fitting in and not being able to name my identity. I will always be queer and trans and hold that legacy of stories in my body. I will always be captivated by silent churches and lofty words and dreams of a new and better world right here and now.

This is what my writing is trying to capture: space for people like me to exist. And not just exist but also to thrive. To no longer be the outsiders but to be the ones centered. To tell our own stories, to name ourselves, to continue to ask questions and find our own answers.

Shannon TL Kearns is a transgender man who believes in the transformative power of story. As an ordained priest, a playwright, a theologian, and a writer all of his work revolves around making meaning through story.

Shannon’s first book “In the Margins: A Transgender Man’s Journey With Scripture” is available now from Eerdman’s Books.

Shannon is a recipient of the Humanitas New Voices Fellowship for 2022, a Playwrights’ Center Jerome Fellowship in 20/21 and he was a Lambda Literary Fellow for 2019 in playwriting and in 2022 for screenwriting. He was a Finnovation Fellow for 2019/2020. He is a sought after speaker on transgender issues and religion as well as a skilled facilitator of a variety of workshops.

Shannon co-founded QueerTheology.com with Brian G. Murphy. Since its start in 2013, this work has reached more than a million people all over the world through videos, articles, and online courses and community. Their Queer Theology podcast is the longest running LGBTQ+ Christian podcast.

Shannon founded and led Uprising Theatre Company in Minneapolis for 6 years. That work focused on social justice theatre that empowered people to take action as well as uplifting the voices and stories of trans and nonbinary artists.

Shannon’s plays include Body+Blood, in a stand of dying trees, Line of Sight, Twisted Deaths, The Resistance of My Skin, and Who Has Eyes To See.